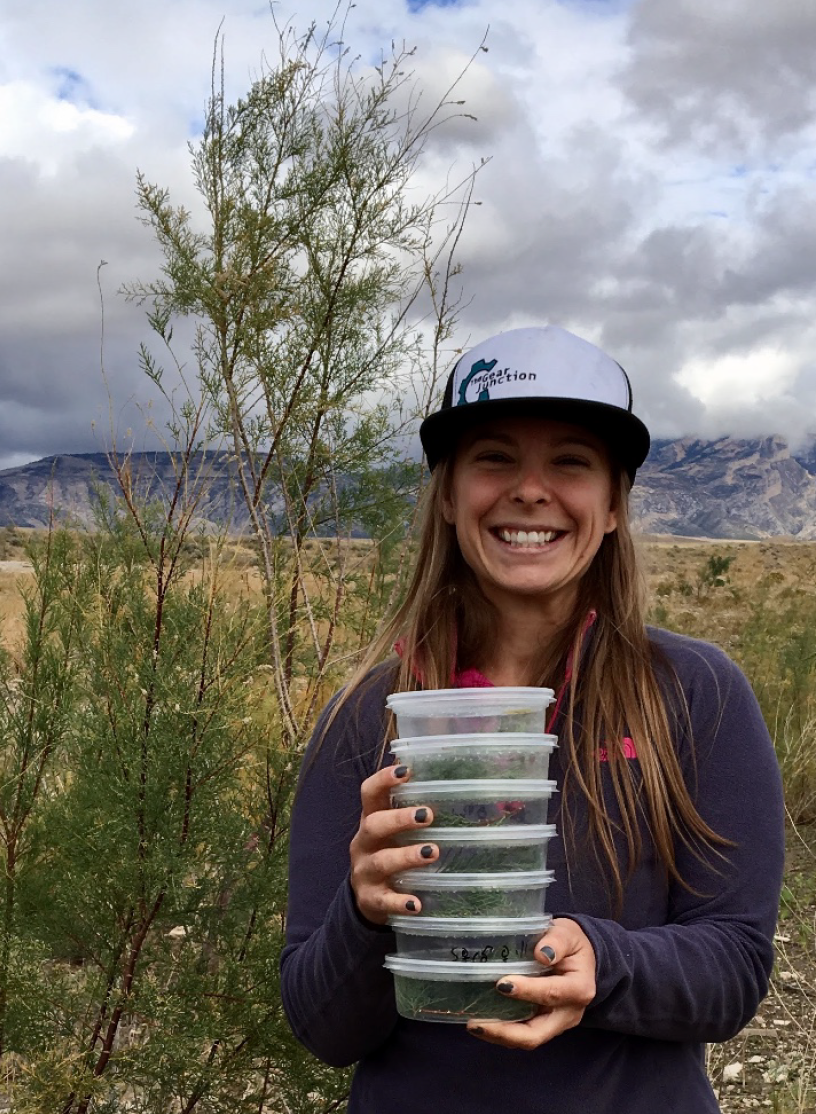 When Amanda Stahlke started her doctoral work in the Bioinformatics and Computational Biology (BCB) program, she intended to begin by assembling and analyzing the genome of the tamarisk beetle system that has been the focus of her research for years. Now, nearing graduation, she is finally finishing the analyses and genome assemblies that she thought would be her first step. “I’ve been humbled by the task that this actually is,” she says.


Stahlke was an undergraduate biology student at Colorado Mesa University in Grand Junction when she fell in love with genetics. “I had a hard time figuring out how I was going to make a career out of what I really wanted to do—which was play outside—and this interest I had in genetics and evolution.”

During an undergraduate research program with genetics Assistant Professor Zeynep Ozsoy, Stahlke found a perfect union of her interests in the tamarisk beetle—a biocontrol species introduced to control an invasive shrub along river corridors in the Southwest. “There are all these incredible eco-evolutionary and genetics questions happening across the landscape, so I got to marry those interests by working on that system.”

Later, while monitoring tamarisk beetles at the Palisade Insectary in the Colorado Department of Agriculture, she realized that high-throughput genomics had hardly been applied in the tamarisk beetle system or in any other classical biocontrol system. She saw the opportunity and decided then to investigate the topic in graduate school.

With her research project in mind, Stahlke began scouting out universities. “I was looking for an institution that would help me develop that system that didn’t exist anywhere, which was definitely a challenge.” Her search proved successful when she received a reply from biology Associate Professor Paul Hohenlohe. His response led her to explore the BCB program, and she was excited by what she found; alumni of the program had gone on to work in governmental science, as well as private sector, postdoctoral, and faculty positions.

The opportunity to have Hohenlohe as a mentor, coupled with the courses to develop bioinformatics skills and an area that was perfect for playing outside, was enough to bring her to Moscow. She started on Hohenlohe’s Tasmanian Devil research project, understanding the importance of working on multiple systems to broaden her expertise in applied eco-evolutionary studies. She is appreciative of the lessons learned from that research; “as much as I have fallen in love with the Tasmanian Devil system and wildlife conservation, I now know that I am most interested in plant-insect interactions and systems that are impacting my local environment.”

A Scientist at the ARS


Like any phase of life, graduate school came with challenges. Being a first-generation college student and in a long-distance relationship meant Stahlke had to persist through low points and reaffirm to herself why she was there. She also had to tackle the drawn-out and demanding work of developing new resources to test her hypotheses. “Every year my genome assemblies get a little bit better, and the technology Is improving all the time,” she says. “But it’s humbling. The frontier is lonely.”

Stahlke recalls that a defining moment in her journey was an internship with the USDA Agricultural Research Service (ARS). In her work there with John Gaskin at the Northern Plains Agricultural Research Laboratory (NPARL), she was able to use her computer science and math statistics focus for a biocontrol system. “Working with the ARS was like a lightbulb for me,” she says. “it was exactly what I wanted to do, with the people I wanted to work with.” Since then, she has focused her efforts on becoming an ARS scientist.

The BCB program has prepared Stahlke to navigate the rapidly shifting ground of non-model systems in the world of genomics. She says, “the training I’ve received has been critical to examining new technology, new models, and making decisions to help ride that tide.”

In 2020, Stahlke was awarded a postdoctoral fellowship from the USDA Agriculture and Food Research Initiative (AFRI) to continue her work on range expansion in a species of tamarisk beetle. She says, “this is a really good example of IBEST supporting the research of BCB students.” The collaborative, rich network at the University of Idaho and institutes like IBEST and IMCI has helped her research thrive—research that she hopes to carry with her to the ARS.

Illustration of a tamarisk beetle


After spending her Ph.D. developing the required resources and successfully defending her thesis in April, Stahlke is excited to test the hypothesis that she originally set out to. She is joining the ARS Ag100Pest Initiative as a Computational Biologist. The initiative provides genomic resources for agricultural pests and is the USDA’s contribution to the Earth BioGenome Project (EBP)—a global initiative to sequence the biodiversity across the world. Because of her time in the BCB program, Stahlke will bring both bioinformatics skills and her work on biocontrol systems to the position. “I’ll be providing genome assembly support for existing projects within the agency and continue working in the biocontrol world by developing genomic resources for biocontrol agents,” she says. “I feel incredibly lucky to have found a home for my research program, and I’m looking forward to collaborating and continuing our work.”