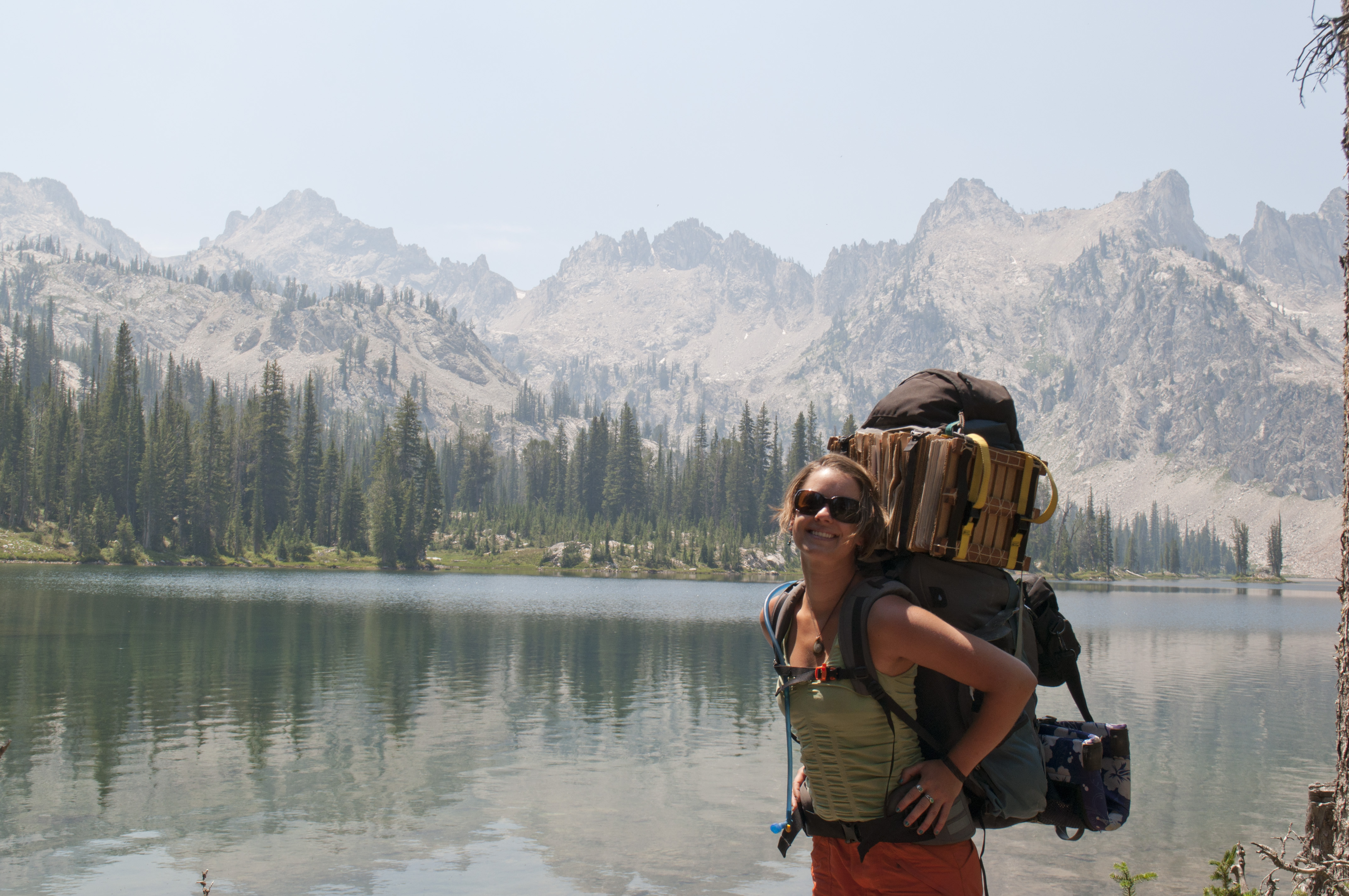 In the summer of 2005, Hannah Marx worked as a waitress in the Sawtooth Mountains of central Idaho. She loved hiking in her time off and says, “I was fascinated with the plants I was absorbing.” When she returned to the University of Washington for her second year of college, she took a plant identification course to learn more about the plants she saw. “From there, I fell in love with botany. I got increasingly interested in central Idaho, which is where I ended up doing all my fieldwork when I came to the University of Idaho.”


Even while attending school at UW, Marx quickly formed a connection to Idaho. She was taught by professor Richard Olmstead, who at the time was Dave Tank’s PhD advisor. Marx says she and Tank “barely overlapped; he left for a postdoc just as I was starting to do undergraduate research with Dr. Olmstead.” But after deciding to pursue graduate research, she connected with Tank again, and joined his lab at the University of Idaho. “I came to Idaho to work with Dave, and because of the location. It was close to the Sawtooths, where I wanted to eventually return to do my research, because that was the area that inspired me in the first place.”

Marx considers herself an evolutionary plant ecologist and is interested in understanding why different species of plants live in different places—specifically, alpine areas. “I think it’s really incredible that so many different species of plants have adapted to cope with extreme environmental conditions on top of mountain summits.” Another component of her research uses species invasion to understand community assembly. “You can look at species invasion as a really nicely replicated colonization or assembly of communities.”

Paralleling Marx’s research, Dave Tank’s lab core focus is phylogenetics, with emphasis in molecular systematics. They use molecular tools, DNA, and genomic data to reconstruct phylogenies, then use those to investigate biological questions. In this area, Tank and Marx’s research backgrounds started in the same place—the Olmstead lab at UW. The Tank lab also studies macroevolution and community phylogenetics, the latter of which has evolved because of Marx’s time in the lab. In grad school, Marx was looking to expand her work with community phylogenetics, and Tank’s lab provided her with the resources to do that. He says, “Hannah joining my lab was what built that side of my research program. Nearly all my publications in that area are with her as a co-author.” 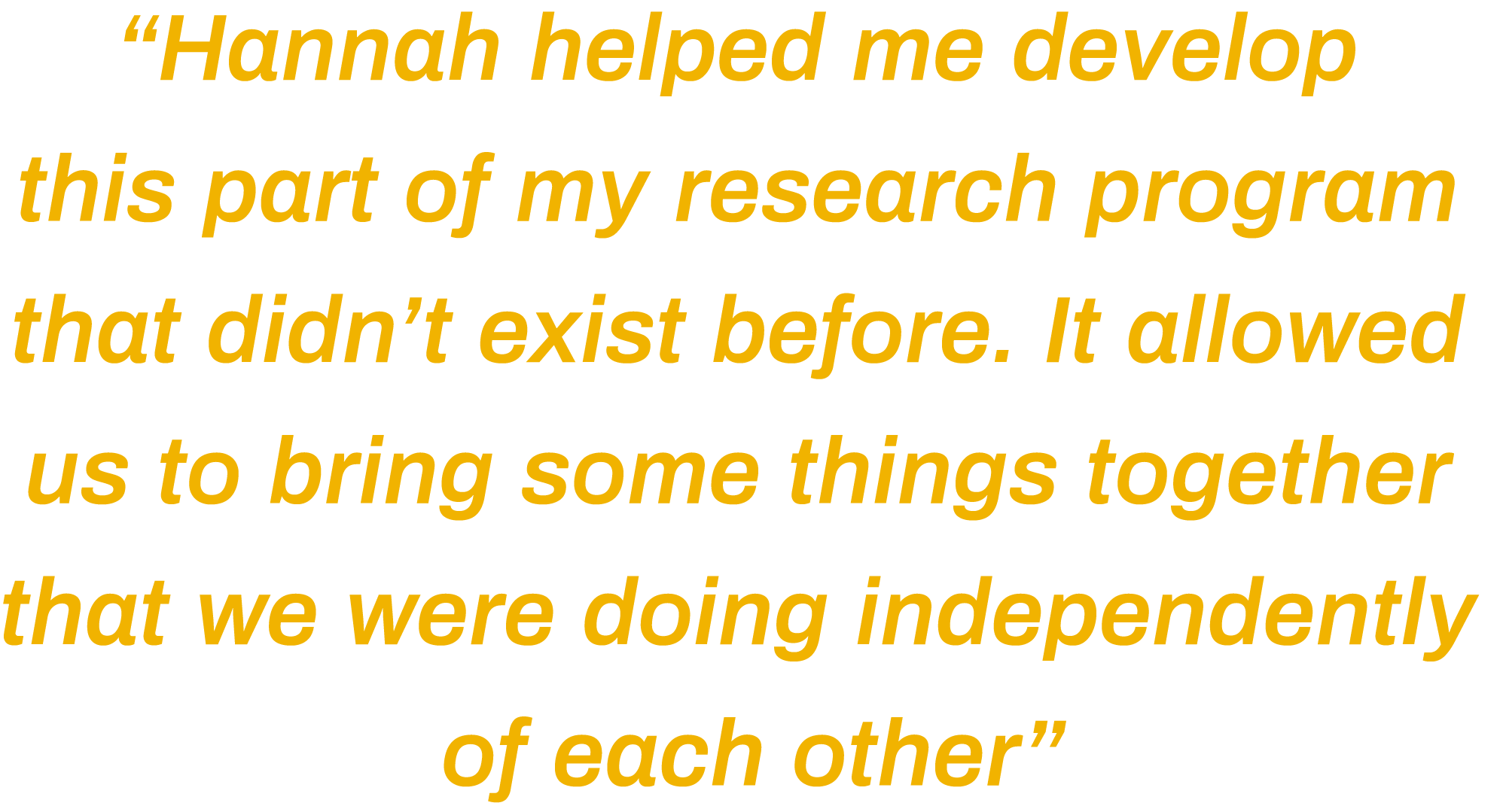 Often, graduate students will work on pre-defined projects with their faculty advisors, but Marx says that Tank gave her the space to ask whatever she was interested in. “Dave was really open to working with me on any idea that I came up with to pursue for my research project. Even though he studies plant systematics, and I was interested in community diversity, he was really supportive of that.” Allowing Marx to pursue her own research ideas bettered Tank’s lab as well. He says, “she helped me develop this part of my research program that didn’t exist before. It allowed us to bring some things together that we were doing independently of each other.”

Early on in their collaboration, the lab built a phylogeny from a dataset of the San Juan Islands that Marx had helped collect. Tank says he was focused on Darwin’s Naturalization Hypothesis and was “particularly interested in how non-native species were related to the native species there”. He appreciated being able to bring together pieces of each of their work “to address a question that’s been around since Darwin’s time.” One of Marx’s skills, says Tank, is explicitly linking fieldwork to broader research programs. She brought that skill with her to the U of I and uses it to drive her research today. Marx also excels at making far-reaching collaborations. Tank admits, “We’re often isolated in our little bubble of communities. Hannah’s research used systematics tools but had more ecological questions.” Marx has developed collaborations that continue to this day, including spending a year in France as part of her graduate program. Tank says, “That was another special thing that Hannah brought to her projects.”


After her time at the University of Idaho, Marx spent two years at the University of Arizona in Tucson. She says, “that opportunity allowed me to delve into some functional genomics and community diversity that I was interested in before but didn't have the time or the skillset to fully explore. I took the bioinformatics skills that I obtained at University of Idaho and [the] BCB [program] and applied them there.” She currently is at a postdoctoral position at the University of Michigan. While there, she has returned to the broader Alpine biodiversity and evolutionary questions that she originally started her research with. “I think both of those postdoctoral positions deepened my research program and also broadened it.”

When applying for faculty positions this year, Marx was interested in opportunities that also had a curatorial component. “Biological collections have always been integral to my research and the reason why I became interested in science in the first place.” In her search, she found the perfect fit—a biology faculty position that included curating the Herbarium at the Museum of Southwestern Biology, where she will be the first female to assume this role. And at the University of New Mexico, the location was ideal as well. “The mountains there are the southern extent of the Rocky Mountains, which is where I originally started working on alpine plant diversity. So, it was really a logical extension of my research along the latitudinal gradient of the Rocky Mountains. It all came around full circle.”

Opportunities That Built a Career


Looking ahead with excitement, Marx is eager for several things at her new position. “Firstly, the herbarium. It involves both growing the collections and developing them to interpret new types of data—linking DNA samples for future researchers to be able to use molecular resources a little more easily.” She is also excited to research the largely understudied flora of New Mexico. “It’s a huge state, but we don't have a great understanding of the flora, particularly in the alpine areas. I'm excited to organize some collecting forays—mirroring what Dave Tank does at the Stillinger herbarium—but bringing that to New Mexico.” In addition to continuing her research, Marx is ready to teach and mentor students of her own. “I get the opportunity to teach a Flora of New Mexico course, which is a dream course for me. I'm also excited to be able to mentor students of my own. I’ve been fortunate so far to have had some great mentors like Dave Tank and other faculty at Idaho.”

Marx is going into this position with some set goals for herself and her research. “Collecting is my first major goal; trying to collect strategically is important. The opportunity to curate a museum or herbarium doesn’t come around very often, so I have a lot of ideas of how I want to develop it.” She has many specific research goals, but generally wants to continue to advance her research, and see where her students take those ideas.

Looking back over her career, Marx attributes elements of her success to several opportunities she had early on. “When I was an undergrad, I was awarded an NSF Graduate Research Fellowship Program fellowship. It really impacted my career because it allowed me to go where I wanted for grad school, so I had that freedom. I was able to choose to work with Dave, rather than having to go where the funding was. That was huge.” That grant also contained an international research opportunity, which Marx was awarded as well. “I spent a year of my graduate program working abroad in France. That extended my graduate work quite a bit internationally. I also made a lot of really good collaborations with colleagues that I will probably maintain for the rest of my career.” She determined that those opportunities were so integral to her success because the made her happy. “They really lent to my comfort and happiness throughout grad school, which can be a very difficult, challenging time.”

The Cycle of Mentorship


Hannah Marx is an excellent example of where alumni of the Tank Lab have gone with their careers. From his lab alone, Tank has four PhD and three Masters graduates that he stays connected with. They are in a diverse range of places and positions, including Curator of Western North American Botany at the California Academy of Sciences, an industry position at a human genetics company in San Francisco, a postdoctoral position at the University of Minnesota, a botanical consultant for an environmental consulting firm in Missoula, a lab tech at an evolutionary genomics lab at the University of Montana, and a PhD student at Yale.

Tank says that when working with grad students, he goes in with the mentality that “from day one when they start graduate school here, this is the start of their career.” This helps him not only develop a strong mentor relationship with students, but also a relationship with them as a junior colleague. “It creates a space where there’s more ownership of what they’re doing—they’re not working for me; we’re working with each other.” He says wanting to mentor students “comes very much from my own experience and my advisors. These are people I’ve had great relationships with, and I want to have that with my own students.” Tank gets satisfaction when he gets news like Marx’s. “It’s incredibly rewarding for me to see that first cohort of students, which Hannah was part of, getting jobs and establishing themselves.” He is glad he is able to help students further their careers. Looking back over his own career, Tank says “I chose to come to the U of I very much because of that relationship with graduate students, and I wouldn’t have these same opportunities in other types of careers.”

Tank has worked with many grad students over the years, and he loves seeing where they go in their careers. “One of my big worries with being a mentor is what happens to those students. Especially right now, academia is a tough environment.” Many of his students, including Marx, have struggled with rejection while looking for jobs, but Tank is always there to encourage them to keep looking for opportunities. He tells them, “it might not be exactly what you envisioned when we started, but good people get jobs. I stand by that.” Marx appreciates that positive relationship, saying “Dave has always been supportive, through good times and bad, as a mentor and as a friend.”