When she started her path on higher education, Kenetta Nunn wanted to go to medical school. She got her bachelor’s degree in biology from Duke University, going the pre-med route, but after working in two different jobs, she realized that research appealed to her more than medical school did. She noticed that with her current level of education, she wasn’t going to go very far in her field. “I wanted to learn how to think like a scientist and come up with ideas and questions and know how to test those questions.”

After being out of school for five years, she reached out to a faculty member at the University of North Carolina at Chapel Hill. They were doing work on vaginal mucus and its effectiveness as a protective barrier against STDs, which was interesting to Nunn, and she ended up completing her master’s degree there. She knew she wanted to pursue a doctoral degree next, but she wanted to move away from North Carolina, where she grew up and had completed her education in so far. That’s when she met Dr. Larry Forney at a conference while presenting her work on vaginal mucus and protections against HIV. After discussing their similar research interests and communicating for several months, Nunn applied to the University of Idaho’s Bioinformatics & Computational Biology graduate program and was awarded the President’s Doctoral Scholars Fellowship. This prestigious award is funded by Idaho EPSCoR and consists of $50,000 awarded annually for four years. It was established to provide competitive financial support for STEM doctoral students and recognizes outstanding academic achievement.

She didn’t know anything about Idaho before coming here, but that first meeting with Forney, who would later become her mentor, led her across the country to pursue her doctoral degree. Nunn says it took her a while to adjust to the new environment—one very different from her home of Durham, North Carolina. “It’s really hard to not see many people that look like me.” She admits the first couple years were especially hard, but she found a good support system, through church and roller derby. “I found my little pockets of community to help me adjust.”


Nunn’s work is centered around the link between estrogen and the vaginal community. She discovered during her master’s work that HIV could be trapped in vaginal mucus in some women but was freely moving in others, meaning that viruses would either quickly enter human cells and infect them, or move more slowly, reducing the risk of infection. “We noticed that there are differences in the composition of the vaginal microbiome between those women that could trap viruses and versus those that could not.” She is now trying to decipher the relationship between these two facts. She wants to know more about the differences in women’s vaginal microbiome, what drives those differences, how they relate to estrogen levels, and what all this means for women’s risk for disease.

“In my work, I’ve had four to five different projects that all are geared around trying to understand that link between estrogen and the vaginal community.” Understanding these links is difficult, says Nunn, because “It’s quite messy.” Estrogen causes the vaginal epithelium (the cells within the vagina) to thicken, and that correlates with glycogen deposits within the epithelium. Glycogen is a polymer that is thought to be an important resource for the bacteria that are present. It was assumed that estrogen leads to more glycogen, which is associated with a particular species of bacteria within the community. However, Nunn said “I’ve found out that whole story doesn’t make sense. It’s not as simple as going from A to B to C as we thought.”

Nunn’s dissertation “looks at how estrogen and glycogen could be potential drivers of the composition of vaginal communities.” She conducted several studies around this possible connection. One study sampled from at a cohort of adolescent black women, examining the relationship in the community between estrogen, glycogen, and lactobacillus—a bacteria associated with good vaginal health. Another study enrolled women to look at particular enzymes that are thought to be important to breaking down glycogen into simpler sugars for the vaginal community. 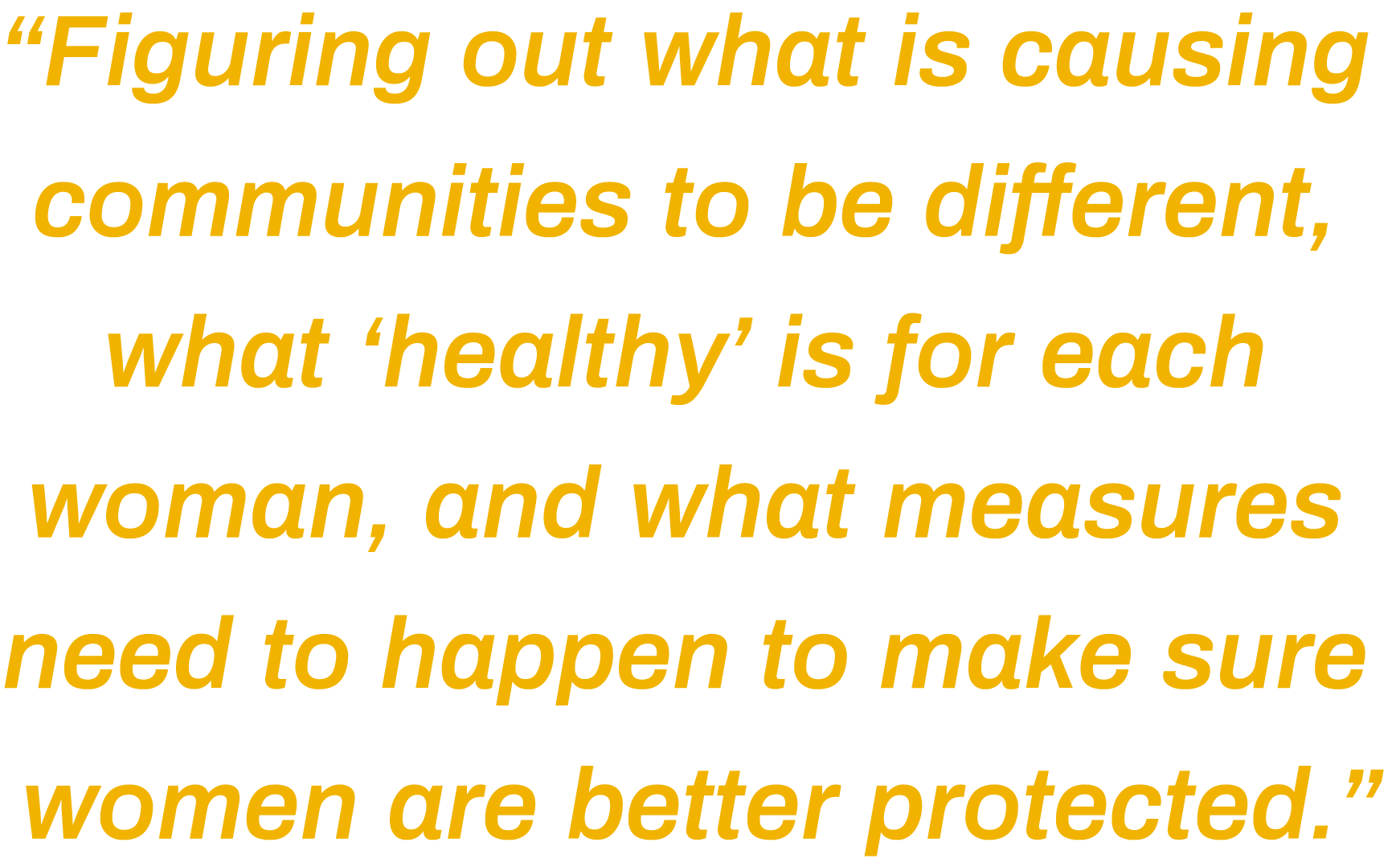 Nunn’s line of work is important because the composition of vaginal communities has been linked to the risk of acquiring STIs, preterm births, and other reproductive outcomes in women. She believes that “understanding what’s driving these communities to be healthy, or what ‘healthy’ is in individuals—because it differs between women—and understanding what things lead to increased risk, might help us better protect women.” If we know what is causing certain bacteria to be in the community, we will know if a woman has high or low risk. This means “figuring out what is causing communities to be different, what ‘healthy’ is for each woman, and what measures need to happen to make sure women are better protected.” The diverse range within the microbiome and between women, as well as outside factors, is what makes this such an important and intricate topic of study. For example, of sex workers are a population that are more at risk for STIs and disease. If they also have a particular vaginal community type, then that risk gets compounded. Understanding how all these factors interact will help develop better treatment and risk management programs.

There is a lack of knowledge in the area that Nunn has chosen to study, so her aim right now is to “increase understanding and figure out what’s happening, because we really don’t have any clue. Even with the research that I’ve done, the more I unravel, the messier it gets. The more we know, the more we realize we don’t know.” Other factors like diet, stress, and the immune system all may affect the complex system of the vaginal community, but none of these have been studied yet. “There needs to be this entire consortium of people, like immunologists and microbiologists and people who study nutrition—all those people need to talk to figure out what’s happening.”

The Hardest Part of a PhD


One of Nunn’s accomplishments during her time at the U of I was the “B in your V” study she led from design and completion. She affirmed, “It’s a lot of work for a grad student, but it’s something I really enjoy. I also enjoy talking to people, so interacting with the women that participated in the study was a lot of fun, and an escape from the lab.” Unlike previous studies she had run, there was no funding to pay the participants, so Nunn came up with the idea of giving each participant their personalized results from the study. “Since microbiome profiling has become more popular, I just sequenced their vaginal microbiome and gave them their profile at the time of sampling—they were really excited about that.” The study, which is now almost ready to submit for publication, was a point of pride for Nunn during her time at the University of Idaho.

On the other side, Nunn said that “one of the hard things that I’ve faced in graduate school is feeling like I belong here.” Between the lack of black women in doctoral programs and living somewhere without a diverse demographic, she was constantly questioning herself and trying to figure out where she fit in. She eventually conquered those barriers, saying “at some point I realized I don’t really have to fit in. I do belong here, and I’m contributing the best that I know how. I think that just getting over those mental blocks were kind of hard.” There were some academic challenges she faced as well, from funding to burnout. “Doing your PhD, it’s long and it’s hard. Sometimes it can be really rewarding and you can have really great days, and sometimes it’s just never-ending. The hardest part of a PhD is bringing things to completion.”

Nunn’s next step is postdoctoral research on infectious disease at the University of Michigan. She has always been interested in infectious disease work and would like to work for the CDC or NIAID one day. “I’ve been doing a lot of things that are geared around it, but I haven’t been doing actual infectious disease work. So it’s something completely different, away from women’s health. But I’d like to be able to gain some experience there and take those tools and go back into women’s health.” Now that her time in academia is almost complete, Nunn says that she has the credentials to do the work that she wants to do.