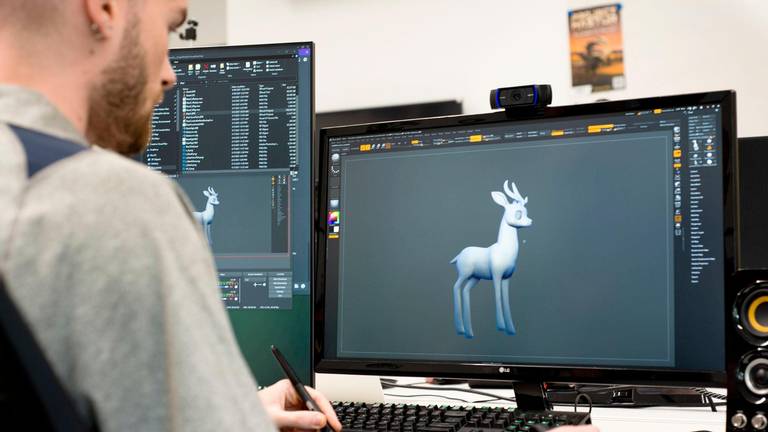 Sporting glasses with black rims and a yellow jacket, a boy with blue hair swims through a river next to a forest. He jumps off cliffs and bounces on large mushrooms. He can whip out a net to capture the opossum, which flips over to play dead when someone gets too close.

If kids did this outside, they might get covered in ticks. University of Idaho game designers instead created a video game that would let students experience and analyze the spread of tickborne diseases, without the risk — and time — it would take in the real world.

Barrie Robison, a professor in the Department of Biological Sciences at the University of Idaho, co-founded Polymorphic Games to incorporate evolutionary and ecological principles into video games.

When his colleagues wanted to understand the growth of tickborne diseases, they recruited Robison and his studio to translate the research into a video game, aimed to serve as a learning tool for middle and high school students.

“(My co-founder and I) have played video games since video games were invented. We still play video games,” Robison told the Statesman. “We started thinking about, ‘Wait a minute — could you build video games on top of like actual scientific models?’”

Now, Robison and his team have turned their attention to a multiplayer platform. After they create an avatar, students will plop down into a field station where they can view data. Depending on the environment—teachers will be able to choose between an area similar to New Hampshire, Idaho, and a Californian redwood area—different plants and animals will surround students and their classmates in different abundances.

Tasked with a goal, such as understanding tick prevalence in different environments, students go off to capture animals with their nets. Once an animal is caught, the system calculates how many ticks are on it or any other relevant information.

When teachers call students back to the field station, they’ll be able to look at the data together. Since it is only a game, students can analyze “data that would take years — decades — to collect,” Robison said.

Because they helped gather the data, Robison said, “we hope that they’re more connected to the result.”